BLACK FRIDAY SALE - DISCOUNTS UP TO 50%

The Combination Action of the PAB Pipe Organ Samples is totally unique amongst Hauptwerk™ organ libraries, and allows you to work the same way as on the real organ. For the first time, you can control different sets of stops (combinations) stored in the organ’s internal memory by a single click or touch, right from the graphical interface. 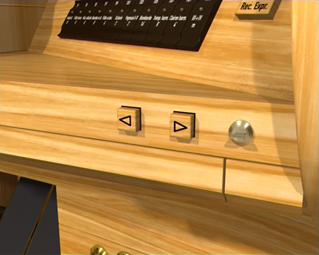 The key element of PAB’s Combination action is the ‘Increment’ and ‘Decrement’ button array, clearly marked with left- and right-facing triangles.

Combination action is used to access presets of different stop configurations with a single click, an essential feature when performing organ pieces in real time.

Each Edition of PAB Pipe Organ Samples is capable of storing different numbers of combinations within its internal memory; the Gravissimo Edition can store 1000 combinations from 000 to 999. You can save and load these programs into a single file by using Hauptwerk™’s built-in Save and Load functionality in the Combinations menu (as of Hauptwerk™ version 3.30).

The Combination Action, or ‘Setzer’ in its Germanic name, is accessed and controlled by a group of dedicated buttons. Ten numerical buttons (numbered 0 - 9) can directly access the first ten memory positions, and are also used in conjunction with the four buttons marked with arrow-like triangles, permitting rapid navigation within the combination memory. The up-down arrow buttons advance/decrement the selection by ‘tens’, while the left-right buttons advance/decrement by ‘ones’ (see below). The S key is used to Set combinations in memory.

Programming and resetting from Graphical User Interface (GUI) or MIDI

Once you define a stop configuration on the console that you wish to save as a combination preset (also called a ‘frame’), press the S button once, and then press either a number or a navigation key to select which combination frame you want to program. If you select the same number that was previously active, the previous combination will be overwritten with the new one.

You can also assign MIDI messages to these buttons so that, if you have a MIDI-capable console, all these functionalities can be directly available to you in physical form as well.

Navigation and use during organ play

Navigating between different combination frames is very easy. You can increment and decrement the current frame by one using the buttons below:

There are also ‘Up’ and ‘Down’ buttons, to make navigation even easier. The up and down buttons increment and decrement the combination frames by ‘tens’. It is a simple matter to use these buttons together with the numerical buttons to quickly navigate to the desired combination frame.

For Example: If you wish to change from combination frame 004 to 025, this is possible by just three clicks. Push the button UP twice (to go from ‘00_’ to ‘02_’, and then press button 5 to get you to ‘025’. The newly chosen combination will only be changed when you push the third numerical digit you wish you reach, e.g. number 5. In this way, you can navigate easily, conveniently, and safely.

Saving entire banks of combinations is just as easy as saving Hauptwerk’s™ own combinations, and can be configured using the same commands.

Combination frame advancement buttons beneath the keyboards and Seq+

These features were made available should you construct a real organ console with such features and wish to equip it with suitable MIDI control. You will find it very convenient to play and develop stop/combination registration with the help of these buttons.