The second in a series of articles dedicated to what many regard as Australia’s finest church organ – and the story of its hard-won virtualization by Inspired Acoustics.

Part Two: A new organ for a new century

Austria...  Australia... what a difference two small letters can make! Fully half a world apart – literally – though in certain respects, many worlds of separation distinguish the two; the one, vivid centrepiece of an elegantly mature culture and fertile cradle to the very pinnacle of greatness in the Western musical tradition – the other, a vast, mostly arid wilderness, tamed and subdued (even now, only in small degree) by a mix of hardy convict and free-settler spirit, rising with its modest but growing population in recent decades to take its place among the nations of influence, and as a prized short-list global tourist destination.

In Part One, we noted the pioneering efforts of the earlier pre-Federation colonial period in Australia’s history, especially as pertaining to the establishment of Victoria’s capital city, Melbourne. One single fact, having nothing to do with human effort per se, but which would prove to have incredible impact on the shaping of the young nation, was the presence, in fantastical quantities, of gold. The undisturbed rocks of the land and the entrepreneurial instincts of the predominantly European-based society would intersect spectacularly in the discoveries that would trigger the Gold Rush of the 1850s. For decades, to borrow Tim Rice’s spicy lyrics from Evita: “The money kept rolling in from every side” – as did the Americans, the Europeans and, perhaps most significantly, the Chinese – the first of many waves of Asian immigration. All told, Australia’s population would triple in just ten years, with Victoria’s gold output only exceeded by the considerably more extensive Californian fields. At its peak some two tonnes of gold per week flowed into the Treasury Building in Melbourne. The £500,000 million worth of gold exported to Britain in the 1850s paid all her foreign debts and helped lay the foundation of her enormous commercial expansion in the latter half of the century. Melbourne was a major boomtown during the gold rush. The city became the centre of the colony with rail networks radiating to the regional towns and ports. Melbourne became one of the great cities of the British Empire and the world.

As ‘home base’ for the Presbyterian Church in Australia, it is not difficult to envisage the Melbourne community’s aspiration and means in realising appropriately resplendent facilities in which to conduct its services of worship. This history, detailed, in Part One, would set the stage for the events that would ultimately bring about the commissioning of what is arguably the finest church organ in Australia. To tell this story properly, we must first be introduced to the man chiefly responsible, Douglas Lawrence. 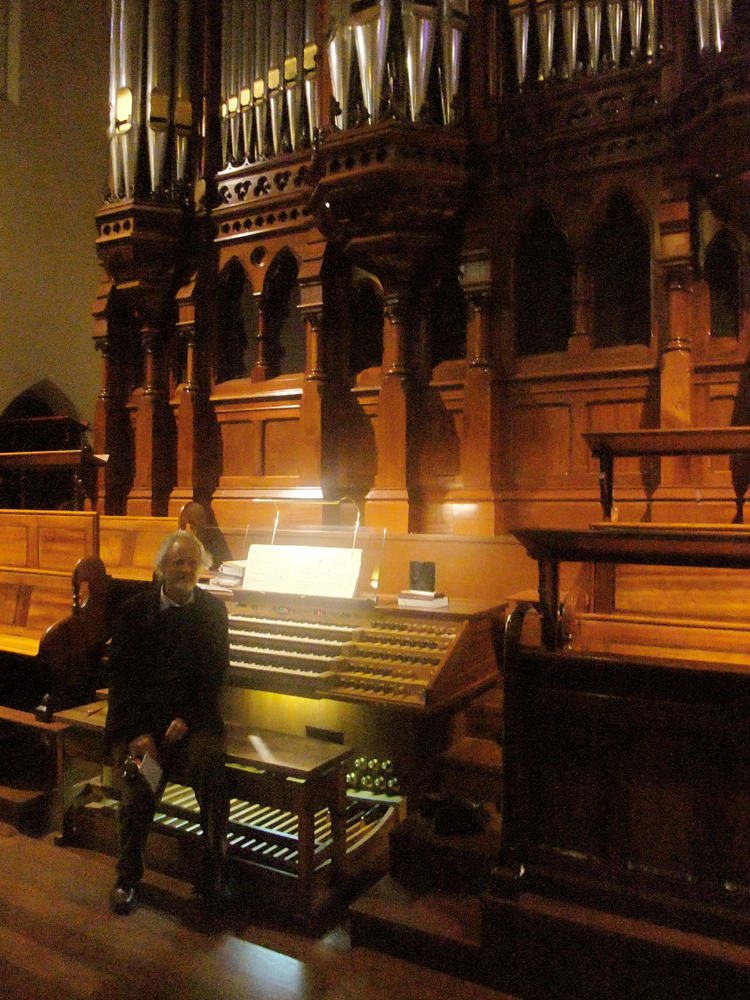 Raymond Douglas Lawrence OAM, is a fascinating man, a figure who has done much to shape the colour and flavour of Australian Fine Arts and culture. In Melbourne, Douglas is Director of Music to The Scots' Church. He founded and directs the Australian Baroque Ensemble and the vibrant Australian Chamber Choir, world-famous as an international touring ensemble of the greatest distinction. He teaches organ for the Faculty of Music at Melbourne University and the Australian Catholic University, and was a sessional lecturer to the United Faculty of Theology. In 1992 he was awarded the Medal of the Order of Australia (OAM) for services to music.

After completing a Masters Degree in performance at Melbourne University Douglas spent two years with Anton Heiller in the Concert Class at the Vienna Academy and during that time began a concert career which has since taken him throughout most of the Western World. His first important concert was in 1972 on the world’s oldest playable organ in Sion Switzerland, built about 1420. Douglas has given concerts there on six subsequent occasions. He performs each year internationally earning the enthusiastic praise of critics. He has given something over 2,000 concerts as organist, harpsichordist or conductor and released a “small pile” of recordings. 2001, for instance, saw five new compact discs; the Bamboo Organ of Manila; two of the new organ in The Scots’ Church; two with The Choir of Ormond College and one featuring the Choir of The Scots’ Church with organist Robin Batterham.

The international press has also given the highest praise to Lawrence for his work with the Choir of Ormond College, which he founded in 1982, and which has toured abroad every two years since 1985.

Douglas Lawrence is much sought after as a judge in organ playing and choral competitions and his opinion is highly regarded in the field of organ design for churches and concert halls. As organist or conductor he has given over 70 first performances. This activity continues unabated with new works scheduled for premiering each year. He has appeared as soloist for the Australian Broadcasting Corporation (ABC), youth concerts, contemporary series and as soloist with the orchestras on television and radio, and gives duo concerts with harpsichordist Elizabeth Anderson.

Amongst several inaugurals Lawrence played the first concert on the organ of the Sydney Opera House and Melba Hall at Melbourne University; and gave the first solo recital on the Casavant organ then in the Melbourne Concert Hall (Hamer Hall). In March 2000 Scots’ Church in Melbourne inaugurated a new 68 stop organ from the famous Austrian builder Rieger.

This instrument, designed by Douglas Lawrence, and regarded by many eminent European, American and Australasian organists as the finest organ ever to come to Australia, is of course the subject of our story. 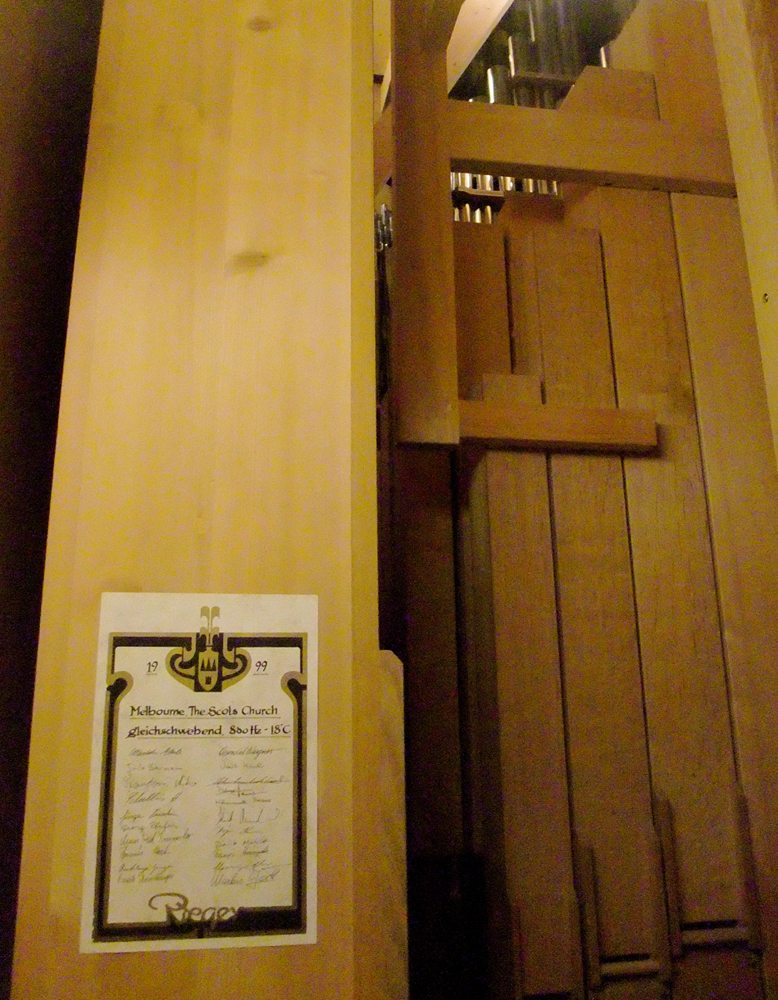 When, in the 1990s, the opportunity arose for The Scots’ Church to replace its ageing organ – something for which Lawrence had long campaigned – there was no doubt at all in his mind as to what he wanted. Visits and discussions with Rieger Orgelbau – the most recent incarnation of the Austrian family firm with a long and prestigious history dating back to 1845 – set in motion a major project that would reach maturity in November of 1999 in a new installation of true national significance.

Douglas Lawrence’s deeply informed, careful, and sensitive conception, coupled with the unstinting craftsmanship of Rieger’s execution, virtually guaranteed both artistic success and critical approval. Indeed, the tonal beauty of the individual ranks, the full choruses, and the majesty of the complete symphonic ensemble of this aurally and visually stunning masterpiece were instantly lauded when displayed in a series of special inaugural concerts, the press gushing in unanimous praise – in the process stamping the firm additional reputation upon Lawrence as a instrument designer of international merit. 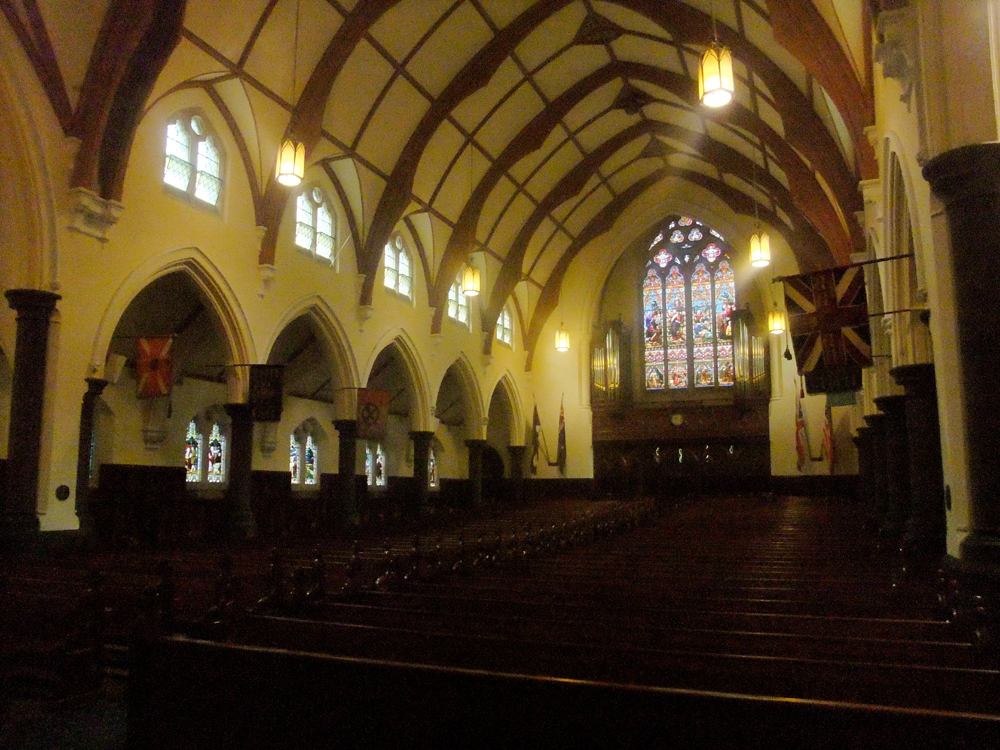 The church’s acoustics – warm, contained, the result of an even complement of hard plastered surfaces and wide expanses of Tasmanian Blackwood panelling – provide for a clear but blended delivery of the finely-balanced pipework into the generously proportioned, though by no means huge, space. The organ – with or without the fourth manual remote gallery division – has real power, a thrilling marriage of weight and sparkle throughout the spectrum. The strings and celestes hover with the greatest French delicacy, the harmonic flutes speak with an almost heartbreaking loveliness; over all these, the profoundly authoritative Trompette Royale exuberantly calls in solo voice, or as the lustrous cap of an exhilaratingly luxurious tutti.

The path to virtualization of this splendid instrument and its church’s acoustics proved to be a blend of circumstances as felicitous as those that had first permitted its specification and construction – a path that would, ironically, take us on a journey into that “vast, mostly arid wilderness” that had first confronted the original European pioneers. We would be walking in the footsteps of several giants. This sometimes uncertain progress, what has now come to be known as “doing Scots” will be the not inconsiderable subject of Part Three.