Acoustics of the PAB organ 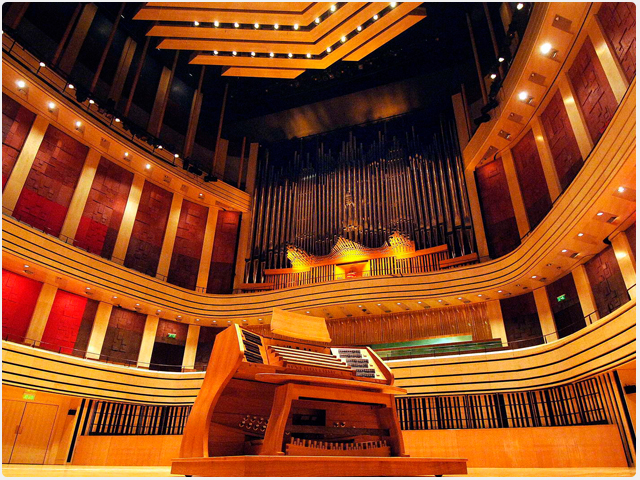 The 92-stop, 5-manual concert hall organ is located at the Béla Bartók National Concert Hall in the Palace of Arts Budapest complex (abbreviated as the PAB organ). Built jointly in 2006 by the Pécsi Organ Building Manufacture as the main contractor and the Werkstätte für Orgelbau Mühleisen as the subcontractor, uniquely at the same time the concert hall was being built, the pipe organ is one of the largest of its kind in the region. The instrument has dedicated HVAC (heating, ventilation, and air conditioning) systems for keeping the temperature and humidity inside the pipe organ steady. The 442 Hz-based equally tuned instrument has 5498 flue and 1214 individual reed pipes, 4 engines with 8 blowers, 22 slider and 22 auxiliary wind chests and a wind pressure between 85 and 130 water mm. It weighs approximately 38,000 kg and is built inside a 918.3 cubic meter volume dedicated space which has a façade surface to the concert hall measuring 155.2 square meters. There are two organ consoles having five manuals each with full compass of 61 notes per manual and a 32-key pedal. The gallery console is of mechanical action and the mobile stage console is electrical. 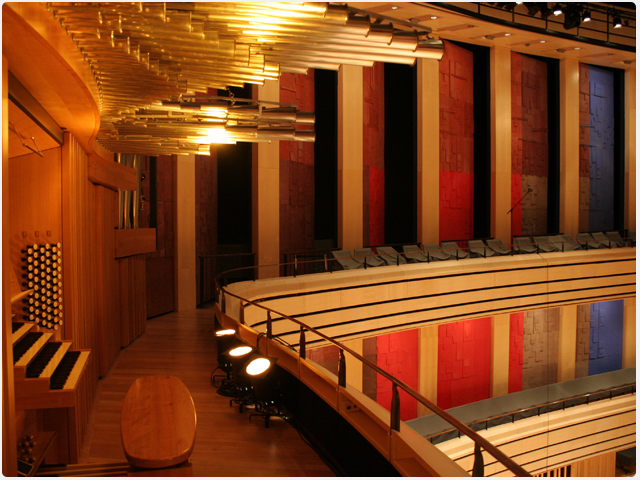 The ARTEC consulted venue is a shoebox type 32500 cubic meter (approx. 52 m long, 25 m wide and tall) modern concert hall with a variable seating capacity peaking at around 1800. The acoustic setup of the hall during the sampling measurements was kept intact while the air temperature and humidity was also stationary. The 45-ton 225-square-meter stage canopy was almost at its full height of 17.5 m, absorption carpets of the second and third floor were fully drawn to reduce reflections from the back of the concert hall (which would occur at around 310 ms assuming an organ gallery listening position) and all doors of the 58 reverberant chambers were fully open to reduce side wall early reflections and to increase the concert hall volume. The stage was widened so the first three seating rows were removed. The wideband reverberation time was also measured in the actual recording setup. Based on this and the shoebox room shape, the very approximate Schroeder frequency of the hall was found to be 15.5 Hz which corresponds to a B-1 note, one semitone below the lowest C key of the 32' foot’s fundamental frequency. This suggests that the lowest few notes, matching the experience of the organ builders, may have some audible spatial level dependency in the hall.

Several acoustic measurements were made on the pipe organs, including the measurement of the attenuation of the organ case between several points, the swellbox frequency characteristics and the engine noise levels. The dynamic and frequency range of the organs were calculated from later measurements. 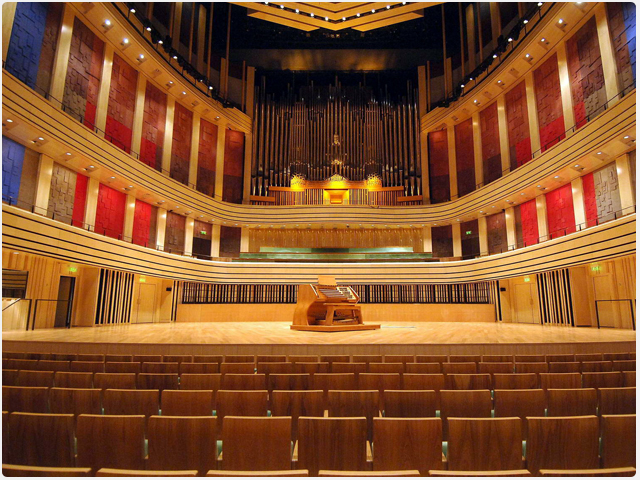 It can be assumed that inside the swellbox an almost diffuse sound field is present because of two main reasons. First, the size of the swellbox in real organs is often of a size that most of the pipes inside them will produce fundamental frequencies above the transition frequency between modal and stochastic behavior of the enclosure. In the PAB organ, the two swellboxes have their Schroeder frequency at 264.47 Hz (C4 +10.9) for the Positive and 252.86 Hz (B3 +33.2) for the Recit, given a rectangular swellbox shape. One can see that these frequencies correspond to approximately the middle C note, so about half of the pipes built in the swellbox will have fundamental frequencies above the modal overlap crossover frequency assuming all of them are 8' stops. But in the real case of the PAB organ, 74.5% of the pipes in the Positive and 70.9% of the Recit swellbox are above this frequency. So, for most of the pipes, the swellbox behaves as a diffuse space. The second reason is more obvious, namely that various other pipes are present in the swellbox as obstacles to radiation resulting in a more complex sound field, thus more close to diffuse. If these assumptions are correct the complex behavior of the swellbox enclosure can be modeled with the simplest approach of using one single FIR filter per swellbox. 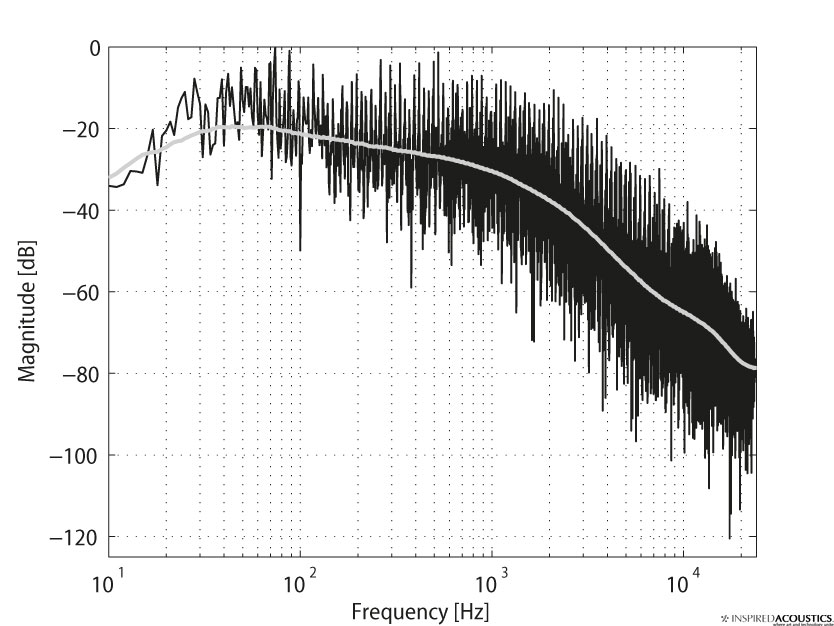 The dynamic range of the pipe organ was analyzed by two methods. As a first step, each note was noise filtered according to a sample taken from the recorded organ engines' noise, one-by-one manually, a process taking about a year to complete. This step was important to be able to combine stops without many instances of the original engine noise. An overall view of the sound level of all stops reveal that the theoretical peak-to-peak dynamic range of the PAB organ is about 81.7 dB, however, in normal use, it is expected to be around 73.4 dB assuming the loudest section is a two-handed double-pedal C major chord in Tutti, at the recording position. As a comparison, the dynamic range of the baroque organ (PSZ) is significantly, 23.8 dB lower with its 57.9 dB peak and 52.4 dB average use values. 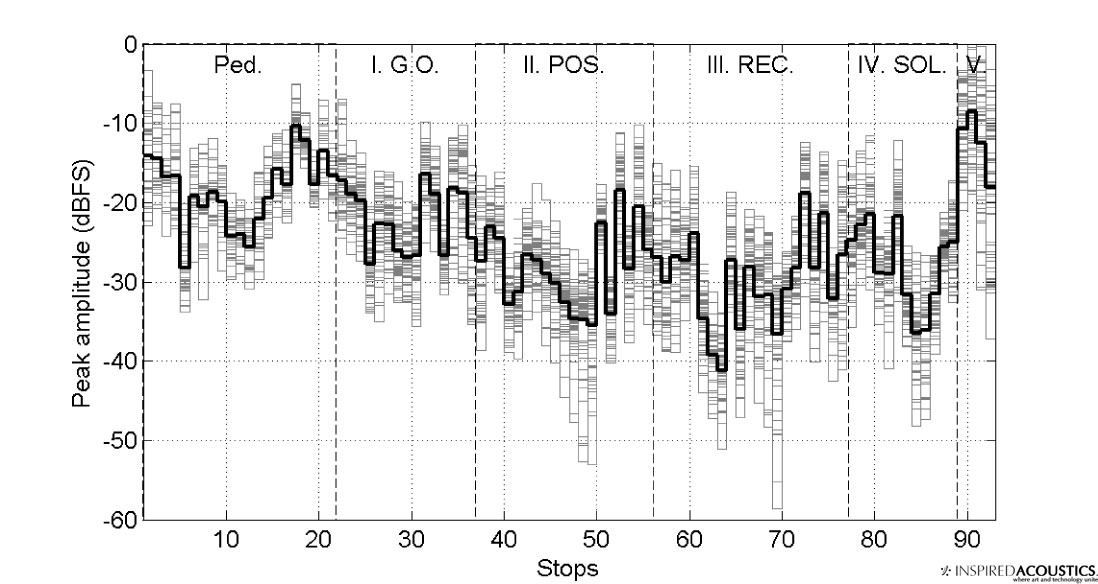 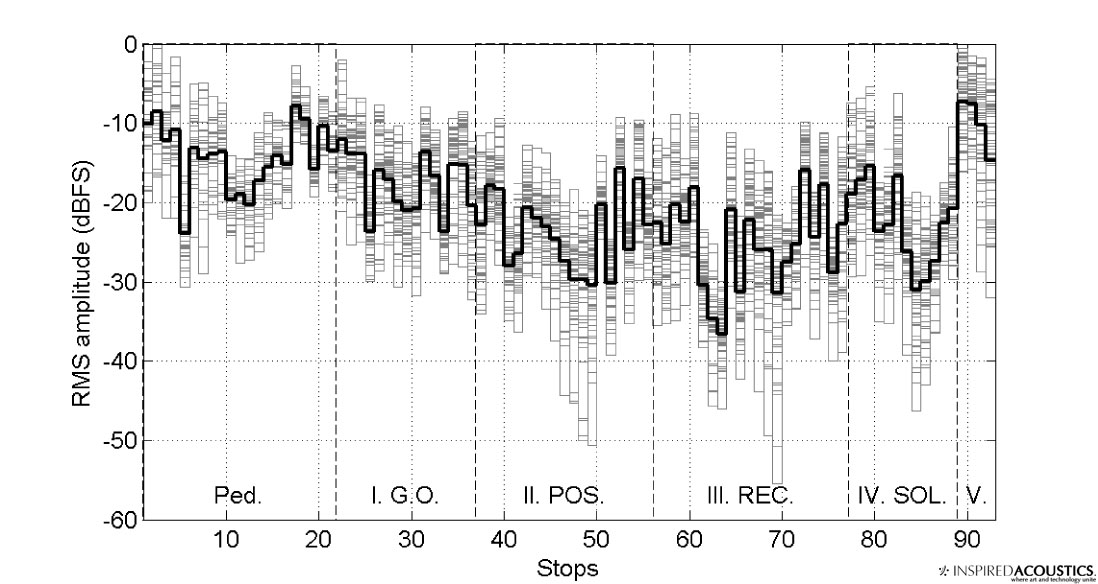 This suggest that recording PAB for musical purposes require due attention: the crest factors (peak to energy ratio) of the different stop sounds vary between 4 dB and 18 dB in a wider range than for example for pop music (which is in common practice assumed to be at 12 to 20 dB). The largest per-stop standard deviation in the peak amplitude is unsurprisingly seen in the Chamade 16'. It is also interesting to note the V-shape of the standard deviation of peak amplitudes along the full keyboard compass: the middle octave has the lowest average deviation while both lower and upper octaves on the keyboard produce larger differences in peaks. The AB microphone setup used in the recording may have an influence on the evaluation of lower frequencies due to its phase cancellations. But interestingly, the crest factor on the PAB organ is not changing as much as the peak amplitudes decrease, suggesting that the energy decrease follows the amplitude's decrease, and that the ‘peakiness’ of the sound of the organ seems to be similar, on average, on all keys – suggesting a balanced sound and intonation. 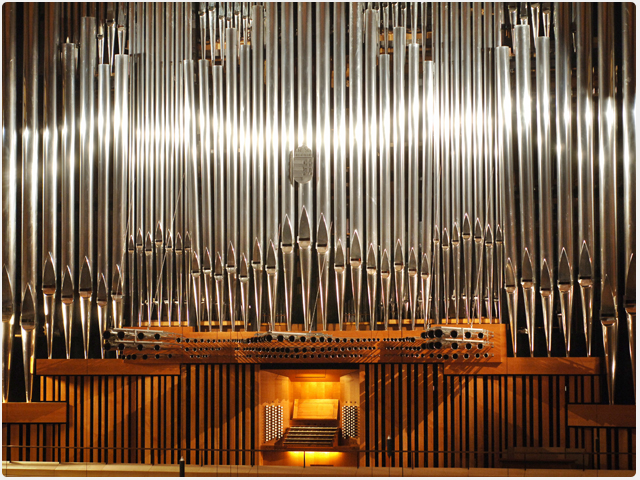 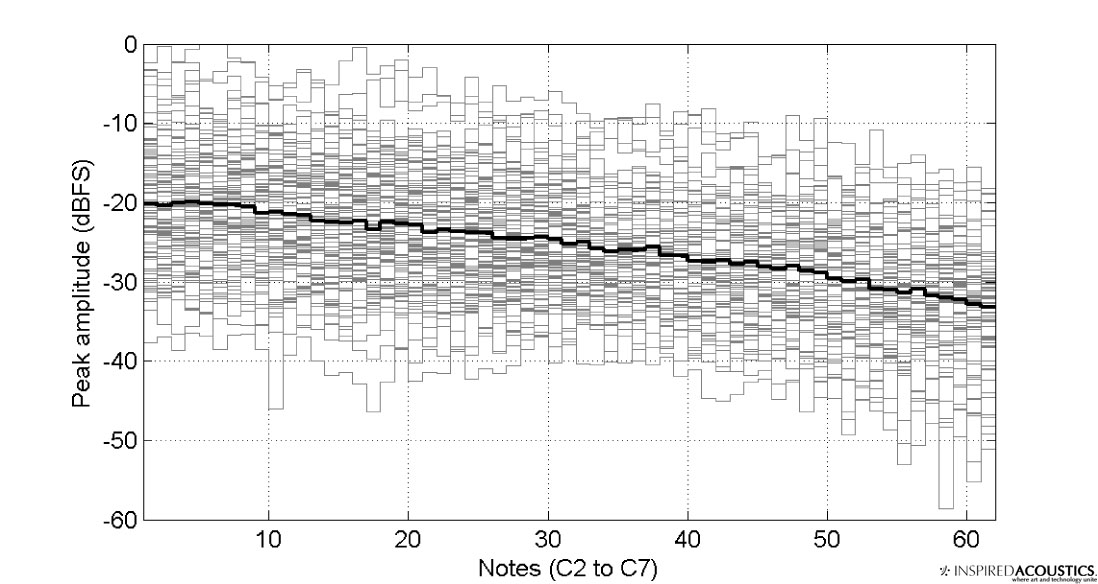 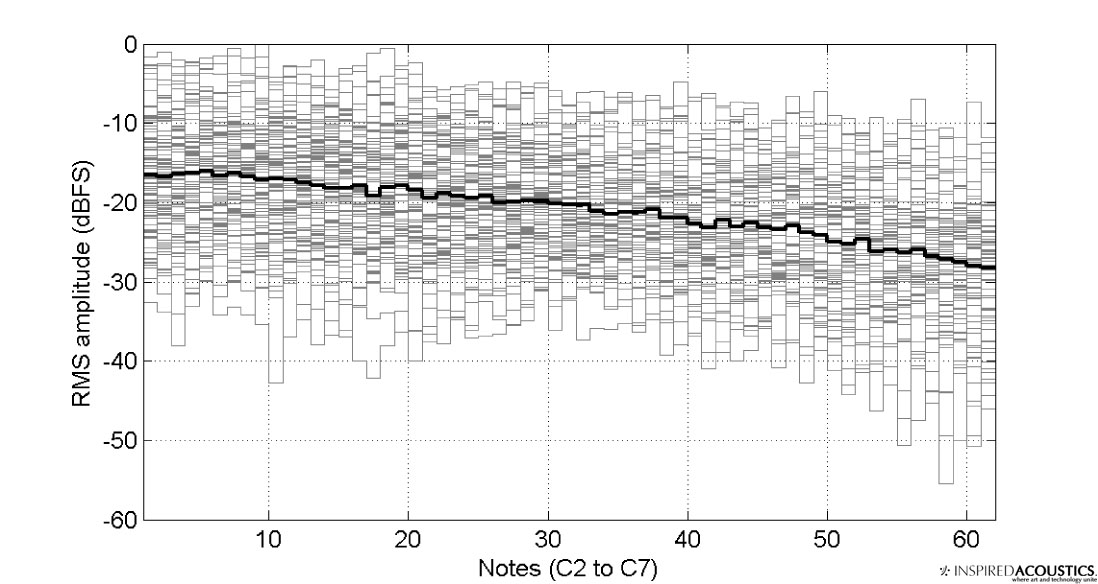 The full bandwidth of the instrument (with the harmonics also taken into account) requires a definition of bandwidth before being able to determine, as harmonics gradually decrease and the final bandwidth depends on a definition of where to choose the limit. The theoretical bandwidth of the instrument can be approximated from the lowest fundamental frequency to the frequency of the highest harmonic content assuming the wideband noise of wind flow, also coming from the instrument, is omitted. The highest harmonic is not necessarily of the note with the highest fundamental frequency, as for example in the case of the PAB organ. It is also important to note that the perceived bandwidth is depending on the distance, too, because of the attenuation of the air. In the case of the PAB organ, we expected that a huge range of frequencies will be excited, maybe beyond the audible range, so a microphone capable of recording up to 40 kHz was chosen. High level harmonics were possible to detect in the A#5 note of the Chamade 4' stop. 50 harmonics were clearly visible and even a 56th harmonic occurring at 52466.55 Hz, though at a 86.85 dB lower level than the loudest harmonic component, very close to the noise floor. This is a much higher frequency than the 25.225 kHz 2nd harmonic of the C7 of Larigot 1 1/3', which had the highest fundamental frequency. The measurable full bandwidth of the PAB organ therefore was 52.45 kHz, beyond the human audible range.